The second generation of the Evoque has a new platform. There are also two hybrid engines: one is “light” and the other is “plug-in”.

Fascinating and full of personality, the Range Rover Evoque was a great success for Land Rover, contributing substantially to the company’s financial statements. His eight years, however, began to be too many, even more so considering that the group of rivals is now thicker and more aggressive, so the English house is running to repair and has renewed from top to bottom this his lucky model, sold from 2010 to today in over 770,000 copies. The change, however, is not radical in terms of style, which remains similar to the older generation, while adopting details inspired by the larger Range Rover Velar. The Evoque 2019 is 437 cm long and has muscular sides, but the surfaces are more polished than before, the roof remains flat and descending towards the tail, as well as the side windows that converge towards the rear window, but the new door handles arrive retractable (coming out of the car), the most tapered rear lights and a new frieze under the mirrors. The headlights can be led matrix type, which create the shadow cones to not dazzle the driver in the opposite direction.
If the style of the Range Rover Evoque 2019 is an evolution of the previous one, below the bodywork the news are more marked. The British SUV is based on the new PTA platform (Premium Transverse Architecture) of Land Rover, designed to accommodate even “light” hybrid engines or “full” hybrids with rechargeable batteries. This latest version will arrive by the end of 2019 and will be based on a new 3-cylinder petrol engine, as anticipated by the same English house, while the hybrid “light” can be ordered from the debut. This is based on a 48 Volt electrical system alternative to the 12 Volt one that includes an electric motor and an additional battery: below 17 km / h, when the driver brakes, the engine goes off and a generator, which acts also from starter motor, recovers energy and the frame in a battery mounted under the car floor. The stored energy is used in re-starts, which become smoother and save fuel. The engines are the Ingenium 2.0 4-cylinder petrol engines with powers 200, 250, 300 hp and 2.0 diesels with powers 150, 180 and 240 hp; the mild hybrid system is standard on all versions with the 9-speed automatic transmission. The 3-cylinder 1.5 petrol will also come in the future.
The PTA platform has the wheelbase increased by 2.1 cm compared to the previous one, so the new Range Rover Evoque more spacious inside, because the English house has also worked on the details to improve the ease of passengers: the suspension (optional those with electronic control) take up less space inside and the new seat supports give a few inches more for the feet, while the drawer in front of the front right seat and the central storage compartment are both more capacious. Even the trunk is more voluminous: its capacity is more than 10% compared to before, according to the English house, and goes from 591 liters with all the seats in position to 1,383 liters with the folded rear sofa (you can also split into three set off). The Range Rover Evoque 2019 is inspired by the Velar also inside, because the central console is now composed of two 10 “touch screens: one manages the” climate “and the other the multimedia system. Do not miss the 12.3 “digital dashboard and the head-up display, which projects some essential driving information on the windscreen, such as speed or GPS directions. Inside there are six USB ports to charge smartphones and the repeater for wireless internet. 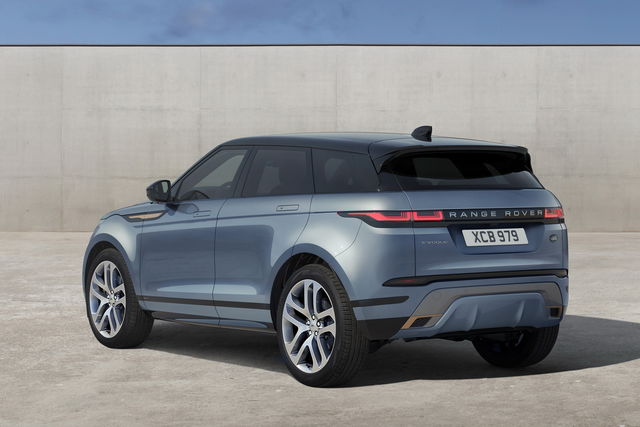