The cooling openings in the bodywork and the new aerodynamic appendages make it clear that the Ferrari 488 Pista is a real “animal” for the circuits. The new model is exhibited for the first time in public at the Geneva Motor Show and represents a sporting evolution of the Ferrari 488 GTB (in the same way as the 430 Scuderia and 458 Speciale were in the past the F430 Modena and 458 Italia).

The Maranello’s technicians have regained many technical solutions from the 488 Challenge and designed a much more extreme and showy body, thanks to the increased frontal appendages, the flat bottom (which guides the air towards the rear slide) and a new rear wing . All these improvements, according to Ferrari, have increased by 20% the boost that the air generates on the body at high speed. 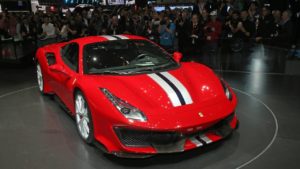 The Ferrari 488 Pista has a twin-turbo V8 engine derived from that of the 488 GTB: the 3.9 is equipped with lightened connecting rods (titanium), a renewed flywheel and new turbochargers. The fresh air intake channels are no longer above the rear wheel arches, as on the 488 GTB, but are now in the vicinity of the rear wing: here they receive a more generous flow of fresh air. Ferrari declares for the 488 Pista a full 720 hp, 50 bhp more than the 488 GTB, which the car unloads on the rear wheels through new 20″rims available for the first time on a Ferrari in carbon fiber. The car manufacturer speaks of an acceleration from 0-100 km / h in 2.85 seconds and a top speed of over 340 km / h. A shot so lightning is achieved thanks to the weight of only 1,280 kg (-90 kg compared to 488 GTB). 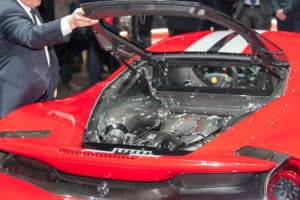 The V8 3.9 engine proves to be more responsive to the accelerator controls, according to the car manufacturer, which has evolved electronic controls to improve the performance of the car in the circuit. On the Ferrari 488 Pista debuts the new control system of the vehicle dynamics called Side Slip Control 6.0, which receives information from various components of the car, such as engine, gearbox, differential, suspension, accelerator, steering wheel and, for the first time, on the pressure sent to the brake calipers: this last function is called Ferrari Dynamic Enhance.