Fiat presented its new models at the Targa Florio in Palermo. These new models are expected in 2019.

These recent days in Palermo (Sicily) on the occasion of the historical re-enactment of the Targa Florio, Abarth presented the new range of its Abarth 595, consisting of the four versions: 595, 595 Turismo, 595 Competizione and 595 Pista to which the 695 Rivale is added (all in sedan and convertible configurations).
The new proposals Abarth 595 Pista and 595 Competizione feature the new version of the Record Monza exhaust, capable of giving the engine a new gritty “voice”, even more capable than previously to immediately transmit the personality and performance of the model. For the Abarth 595 Turismo there are, however, novelties in terms of interior fittings (the seats upholstered in leather and the Urban package that enhances comfort) while for the exterior a new color is available, the gray Asphalt, aimed at underlining the style and give a good impression.
On the new Abarth 595 range, engines with powers ranging from 145 to 180 hp are used. This is the 4-cylinder 1.4 T-jet, available in four power levels: 145 hp (Abarth 595), 160 hp (for the 595 Pista 160), 165 hp (Abarth 595 Turismo) and finally the 180 hp of the 595 Competizione and of the 695 Rivale. As standard, the Abarth 595 have a 5-speed manual transmission, but on request it is possible to have the robotized gearbox with steering wheel controls.
Note in the margin of the presentation of the new Abarth 595 is the participation in the historic Targa Florio of regularity of three cars of the FCA Heritage collection: the Abarth 2400 coupé of 1964, the Fiat 500 of 1974 elaborated with the new Abarth Classic Transformation Box 595 and the Autobianchi A112 Abarth 58 HP of 1974.

We only have to wait the next year to see these splendid new Abarth versions. So get ready and be patient…2019 is around the corner! 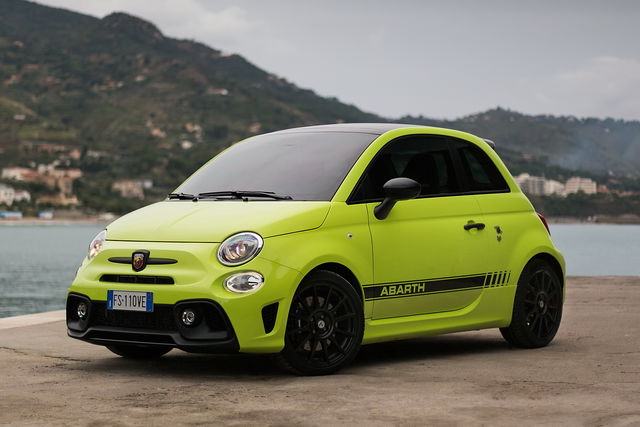