Read the article below to know more about this special car!

After the world premiere at the Paris Motor Show, the seventh generation of the BMW 3 Series is ready to make its debut overseas where, for the occasion, it will be exhibited at the Los Angeles Motor Show (November 30th – December 9th), also in sport. To see the new M3 will wait a few months, but to deceive the expectation in Monaco was born a new model, the M340i that will be positioned just below the iconic Bavarian sports. The commercial debut of the new M340i is set for the summer of next year, both for rear-wheel drive versions and for xDrive integrals.
The new sports version of the German sedan is the link between the range of the most traditional engines and the future high-performance variant, the M3. The prefix M in front of its name, in fact, speaks clearly: the BMW M340i will be a sports car designed to cope with increasingly fierce competitors, such as the S versions of the Audi and the new series of 53 of the Mercedes-AMG.
Aesthetically, the BMW M340i will have bumpers already seen on the M Sport versions, with bumper lines with more aggressive lines and exclusive details, such as the M logos on the brake calipers, the wheel arches and the tailgate. Inside there will also be some Tetragon Aluminum finishes with a more dynamic look, leather upholstery for the sport seats, the Anthracite sky and the M leather steering wheel covered in leather and equipped with a paddle to activate the gearbox. On request, Vernasca leather upholstery with contrast stitching and piping is also available, which can be combined with all the accessories available for the other new generation 3 Series, from the head-up display to the Laserlight Led headlights up to the assistance systems guide, 10.25 “infotainment with advanced voice commands and 12.3” digital instrument panel. 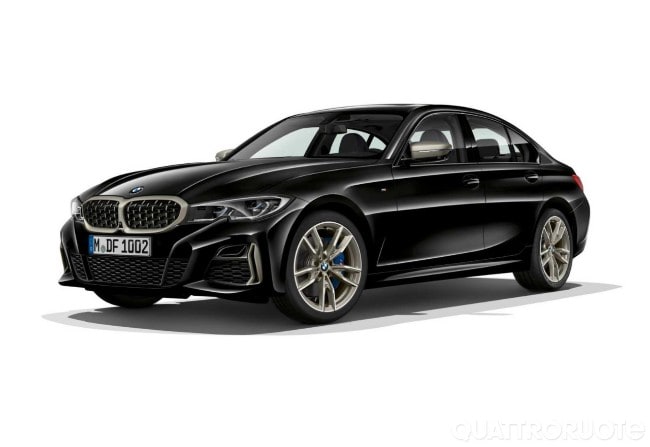