Rent a luxury car in Volterra

Rent a luxury car in Volterra

Volterra, a well-known Tuscany’s walled town perched on a mountain, dominates since the Etruscan era the beautiful and calm surrounding landscape.

Its origins date to even before the 7th century BC when the town was chosen as a Bronze Age settlement for Villanovan people, an important, widespread ethnic group which introduced the iron-working techniques in the Italian peninsula.

After them, came the Etruscan settlers who chose this dominant location as their new, important centre.

Incessantly inhabited since then, Volterra kept on growing and flourished. At the end of the 3rd century BC, the town became a key stronghold for Rome (who left there an incredible Roman theatre…) and, in the 5th century, another power took over…the Church chose Volterra as a bishop’s residence.

Such a strategic location and beautiful town naturally attracted the attention of the Republic of Florence, a prosperous medieval and, subsequently, early modern state, head-quartered in Florence, which conquered and occupied Volterra. It wasn’t always a happy marriage and the town often rose up against the rule of the Florentine people.

The Medici political dynasty replaced, in 1530, the Florentine Republic’s representatives and developed even more this astonishing Tuscany’s mountaintop town. 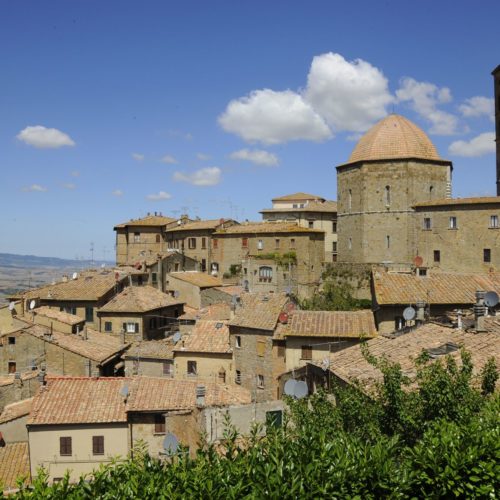 However, above all, Volterra is known for being a sort of alabaster “empress” in Italy. The working of this soft, refined mineral represents an ancient tradition there. Already, back to Etruscan times, these clever settlers discovered the significant natural deposits of alabaster in the town’s surroundings, and used it to create their cinerary urns. In the following centuries, up to now, alabaster – praised for both its compactness and transparency – has been used to create precious vases, tabernacles and even jewels.

To reach this lovely town and visit its Alabaster Museum, close to the impressive medieval Tower Minucci, at the wheel of a Bentley S2 Cabrio or a Fiat 500 will be an experience you will never forget.

You can hire in Volterra the best cars: a sport car, a SUV, a super car, a convertible car or a prestige car. Our fleet include latest sports car and supercars (exotic car), like Ferrari 812 Superfast or Lamborghini Aventador roadster.
Our car brands available in are Aston Martin, Audi, Bentley, BMW, Ferrari, Lamborghini, Range Rover, Maserati, McLaren, Mercedes, Porsche, and Rolls-Royce.