Facing the Tyrrhenian Sea, Sestri Levante is located about 56 kilometers south of the Liguria capital city, Genoa. It represents an unmissable destination for travelers eager to discover the very best of Italy. Sestri Levante is, in fact, a marvel of beauty and colors, of grace and serenity.

Perched on a little promontory, it is considered one of Liguria Riviera’s most astonishing places and has become one of the most visited ones by Italian and foreign tourists. 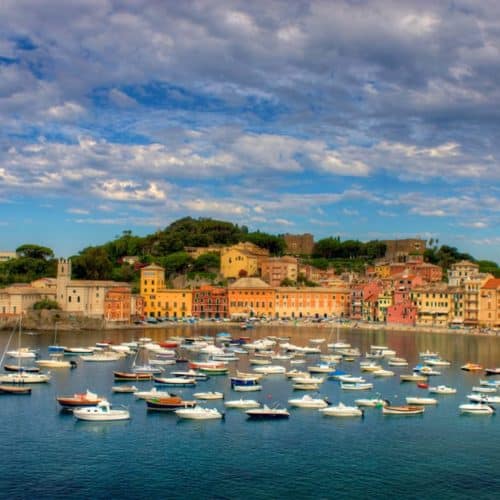 A SIMPLE PAST AS A SERENE FISHING VILLAGE…

Now a glamorous tourist hotspot, along with Portofino and the Cinque Terre’s jewels, Sestri Levante was, nevertheless, founded as a little fishing village, already appreciated for the infinite variety of colors covering its houses’ facades.

Probably this simple yet unique architectural profile, and the poetry conveyed by this quiet village, inspired the master Dante Alighieri, who evoked Sestri Levante in its Divine Comedy’s Canto number 19.

THE EMBODIMENT OF POETRY

Even the names of Sestri Levante’s places seem to come out of a Romantic poetry. Its main bays, for example, are called Baia delle Favole – which means “Bay of the Tales” -, and Baia del Silenzio, meaning “Bay of Silence”, and it is also referred to as Portobello (Beautiful port).

As a matter of fact, the Bay of Tales was thus named because of a Sestri Levante’s very important visitor, the Danish writer, Hans Christian Andersen, who chose this little fishing village as his temporary haven in the middle of the 19th century.

At that time, Sestri Levante was no longer a small fishing village. Part of the Roman Empire, it had become an important merchant centre and, later on, in the Middle Ages, Sestri expanded even more and enriched its architectural outline with, for example, the impressive abbey of San Colombano.

To reach Sestri Levante by car…choose a grand touring sports powerful gem, such as – in order to remain in the Riviera’s spirit – a Ferrari Portofino!

You can hire in Sestri Levante the best cars: a sport car, a SUV, a super car, a convertible car or a prestige car. Our fleet include latest sports car and supercars (exotic car), like Ferrari 812 Superfast or Lamborghini Aventador roadster.
Our car brands available in are Aston Martin, Audi, Bentley, BMW, Ferrari, Lamborghini, Range Rover, Maserati, McLaren, Mercedes, Porsche, and Rolls-Royce.