Rent a luxury car in Padova

Apparently the oldest city in the northern part of the Italian peninsula, Padova can boast a rich, centuries-old past which is rooted in ancient history. According to a remote legend, recalled by the ancient Roman poet, Virgil, in his masterpiece, the Aeneid, the city was founded in around 1183 BC by a Troy’s prince.

Today a national, thriving economic, communication and cultural hub, Padua represents a perfect example of innovation and modernity. However, its architectural profile, the traditions of its inhabitants and Padua’s historic centre are a constant reminder of the way the city cherishes and respects its past. 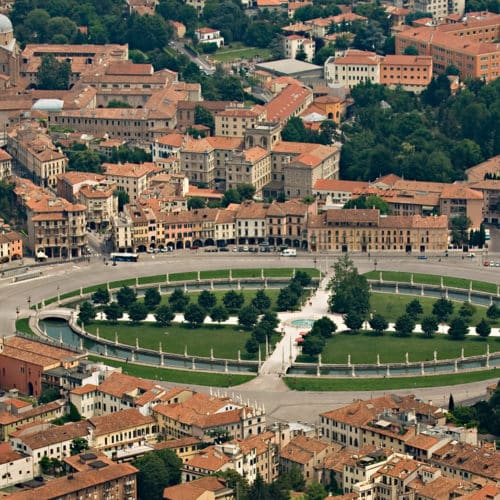 Founded in 1222, the University of Padua is one of the most ancient ones in Europe and one of the most outstanding institutions of higher education in early modern Europe. Second-oldest university in Italy, after the one in Bologna, this Padua’s university is, in fact, the fifth-oldest surviving college in the world. Ancient but also extremely highly praised since the beginning. Two years ago, it has been officially considered one of the best universities in Italy.

In this noble institution, even outstanding figures like Galileo Galilei – the internationally known Italian polymath – were lecturers.

A CITY THAT ALWAYS INSPIRED POETS AND ARTISTS

This pivotal educational and cultural footprint explains the immense fascination exercised by the city on poets and writers from all around the world and from every era. Its historic heart but also its natural surroundings (such as the gentle hilly Euganean landscape) have been praised and described by many artists in their works. The Renaissance poet Petrarch, the 19th century revolutionary poet Ugo Foscolo but also the English master of Romantic poetry, Shelley, wrote about Padua and its environment.

And the master among masters, William Shakespeare, inspired by Padua’s unique beauty, chose this Venetian city as the setting for his comedy “The Taming of the Shrew”.

Picturesque architectural jewel, known for its lovely little squares, its imposing churches and its arcaded streets, Padua can be reached driving through the placid Po Valley, driving an elegant Maserati Granturismo or a powerful red Ferrari California T.

You can hire in Padova the best cars: a sport car, a SUV, a super car, a convertible car or a prestige car. Our fleet include latest sports car and supercars (exotic car), like Ferrari 812 Superfast or Lamborghini Aventador roadster.
Our car brands available in are Aston Martin, Audi, Bentley, BMW, Ferrari, Lamborghini, Range Rover, Maserati, McLaren, Mercedes, Porsche, and Rolls-Royce.