Rent a luxury car in Modena

Rent a luxury car in Modena

Little, quiet and certainly peaceful, Modena is a lovely city located in the prosperous Italian region, Emilia Romagna, on the southern part of the Po Valley.

The serene atmosphere that daily lingers in Modena does not put out of sight, however, the rich culture with which the city is imbued and all the glorious remaining signs of past centuries.

Possibly most of the city’s importance derives from the pivotal education “hot-spot” that Modena represented, already a long time ago, for the whole country and Europe. Its university has, in fact, been founded in 1175 and subsequently further developed in 1686, by Francesco II d’Este, a precocious and very educated aristocrat who became Modena’s duke at the age of two. This athenaeum, the second oldest in the country, has been then connected to the very famous Military Academy, which is partly hosted by the magnificent Ducal Palace, a Baroque marvel, whose central hall is especially known for its 17th beautiful frescoed ceiling.

The ancient heart of the city and, in particular, Modena’s Roman Catholic Cathedral, whose construction finished in 1184, and its bell tower, the Torre della Ghirlandina, as well as Piazza Grande (Modena’s main square) have been included, in 1997, in the Unesco World Heritage List. 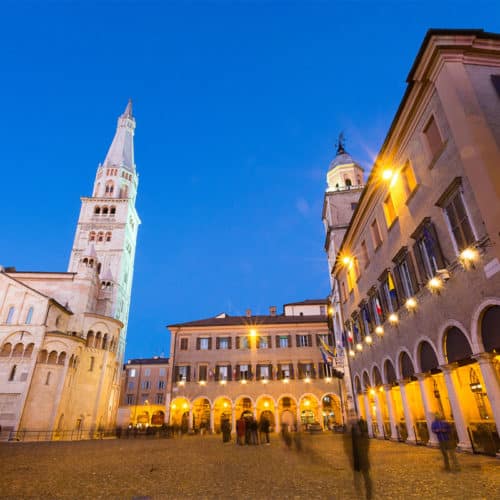 THE SYMBOL OF A SUCCESSFUL NATIONAL AUTOMOTIVE INDUSTRY

An ancient town, Modena is also, today, the very symbol of modernity, engineering sophistication and state-of-the-art vehicles. The city is, in fact, the birthplace of the car manufacturer, Enzo Ferrari. And it is known worldwide for being the location chosen by many automotive industry factories where internationally appreciated sports-cars are conceived and created.

Magnificent Ferraris, Lamborghini, Pagani and Maserati cars come (or came) to life here. The love story between the city and these famous sports-cars can, for example, be evoked through one particular Ferrari model, named “360 Modena”.

You can hire in Modena the best cars: a sport car, a SUV, a super car, a convertible car or a prestige car. Our fleet include latest sports car and supercars (exotic car), like Ferrari 812 Superfast or Lamborghini Aventador roadster.
Our car brands available in are Aston Martin, Audi, Bentley, BMW, Ferrari, Lamborghini, Range Rover, Maserati, McLaren, Mercedes, Porsche, and Rolls-Royce.