Rent a luxury car in Cagliari

Rent a luxury car in Cagliari

“And suddenly there is Cagliari: a naked town rising steep, steep, golden-looking, piled naked to the sky from the plain at the head of the formless hollow bay. It is strange and rather wonderful, not a bit like Italy,” he wrote in 1921, after a stay in the Sardinian city.

And still today the incredibly colorful beauty of the capital of the island of Sardinia, a maritime jewel, overlooking the “Bay of Angels” an facing the Tyrrhenian Sea, is a source of immense pride for all its inhabitants.

Built, like Rome, over seven hills, Cagliari is always ranked among the ten happiest cities in Italy and is often referred to as the “city of sunshine”. The best car to discover the town and the nearby superb beaches is a Lamborghini Huracán Spyder. 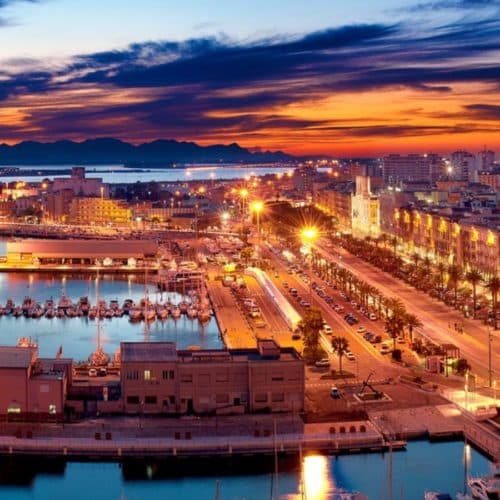 A MOSAIC OF CULTURES

Like many Italian cities, Cagliari experienced numerous foreign dominations. Inhabited since the Neolithic period, the city was conquered by the Phoenicians, the Carthaginians, tasted the Roman rule, the Byzantine authority and the Crown of Aragon’s control….just to mention, here, the most influential ones.

It is this mixture of extremes, of completely different cultures and traditions that made Cagliari the refined, multifaceted city of today.

The complex past of Sardinia’s capital explains the countless monuments, churches and artistic treasures that the city boasts today.

Visitors are, for example, mesmerized by the vestiges of a 13th and a 14th century Pisans’ fortresses, a reminder of the long rule of the Republic of Pisa, but also by the Bastion of Saint Remy and by the Cathedral of Santa Maria. Cagliari also hosts the oldest Basilica of the island, the Basilica di San Saturnino, an exceptional Palaeo-Christian church.

Cagliari’s cuisine is another happy surprise. Rich like the land that conceived it, the city’s gastronomy brings back to life the centuries-old influence of the Spanish and Ligurian settlers and is known worldwide for its tasty fish and seafood recipes, matchless sweets and delicious wines, such as the local Moscato and the Malvasia, a white wine which can be found either sweet or dry.

You can hire in Cagliari the best cars: a sport car, a SUV, a super car, a convertible car or a prestige car. Our fleet include latest sports car and supercars (exotic car), like Ferrari 812 Superfast or Lamborghini Aventador roadster.
Our car brands available in are Aston Martin, Audi, Bentley, BMW, Ferrari, Lamborghini, Range Rover, Maserati, McLaren, Mercedes, Porsche, and Rolls-Royce.