Rent a luxury car in Bologna

Bologna, the capital city of the rich Italian region, Emilia-Romagna, is the seventh most populous city in Italy and an irresistible magnet for scholars, entrepreneurs and tourists. This is due to the open-minded nature of the city and to its very history.

Since its very beginnings, during the Etruscan era, and through the subsequent centuries, under the Roman Empire’s rule, during the Middle Ages and the Renaissance period, Bologna has been a key urban centre in the peninsula and one of the largest European cities for its always growing population.

Maybe for all these reasons, Bologna is home to the world’s oldest university centre, created in AD 1088. This university, known for its superb professors, attracted, and attracts even today, students from all over the world, a development which has given to the city its cosmopolitan and culturally refined features. 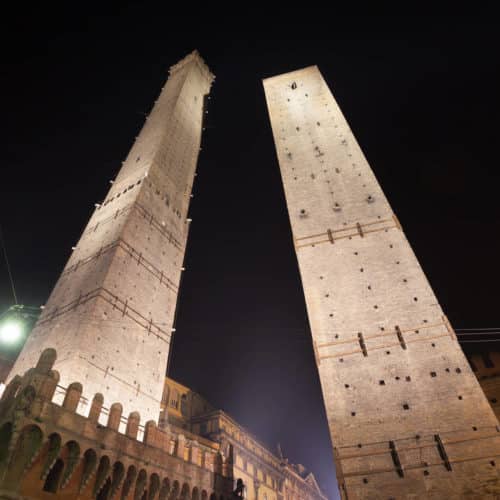 AN UNPARALLELED PLEASURE FOR THE EYES AND…FOR THE PALATE

In Bologna life is therefore light, joyful and… tasty!

Its culinary tradition is among the best ones in Italy. In this beautiful town of elegant porticoes, stunning churches, iconic ancient towers and welcoming squares, restaurants are a must! In this capital city, the internationally known Bolognese sauce, the ragù (a meat and tomatoes sauce for the pasta) was, for example, born.

Tagliatelle, prosciutto, mortadella… delectable wines and tasty desserts (cakes and cookies made with jam, almond paste, rice and amaretto etc.) are a delight for all visitors.

In 2000, Bologna was declared the European capital of culture and, six years after, UNESCO decided to name it the “city of music”.

Museums, exhibitions, theatres and concert halls constantly offer a generous variety of entertainment possibilities. Called the “Dotta” – meaning “the learned one” – Bologna is internationally known for its musical tradition (classical, opera, jazz, folk and electronic) and, today, also for the relentless contemporary art developments it hosts and encourages.

You can hire in Bologna the best cars:  a sport car, a SUV, a super car, a convertible car or a prestige car. Our fleet include latest sports car and supercars (exotic car), like Ferrari 812 Superfast or Lamborghini Aventador roadster.
Our car brands available in are Aston Martin, Audi, Bentley, BMW, Ferrari, Lamborghini, Range Rover, Maserati, McLaren, Mercedes, Porsche, and Rolls-Royce.