Amazing celebrations for the 70th anniversary of Porsche: at Imola mega rally and final of the Carrera Cup Italia 2018

The final stage of the Carrera Cup Italia Championship 2018 has turned into a very big party for Porsche, which on Saturday 6th and Sunday 7th October 2018 organized a series of incredible performances at the Imola circuit of the Porsche Festival as the final stage of the celebrations for the 70th anniversary of “Activity”: the foundation of the German house is traced back to June 8, 1948, when the state of Carinthia registered the plate K 45286 and admitted to the road traffic the Porsche 356 “No.1” Roadster. The most enthusiastic among those present was Gianmarco Quaresmini, 22-year-old driver from Brescia who, finishing third at the finish line in race 2, took a champion of the Carrera Cup Italia 2018, mocking for just five points Alessio Rovera and Diego Bartonelli. The success of Quaresmini also earned the victory for his team, Dinamic Motorsport. During the weekend many other events were scheduled on the circuit, starting with the big Saturday and Sunday parades, where hundreds of customers paraded on the track with their cars. There were also activities on the track with the Porsche sports driving school cars, virtual simulators and some famous Porsche of the past: from the 356 of the late 40s to some legendary racing cars, including the 935 (revised a few days ago in a modern way) to the legendary 917. Among the important guests we mention the former driver Paolo Barilla (winner with a Porsche of the 24 Hours of Le Mans 1985) and Horacio Pagani, who despite having founded his own car company has never made a mystery of his passion for Porsche: the “father” of the Pagans Zonda and Huayra owns a Carrera GT and a 918 Hybrid. 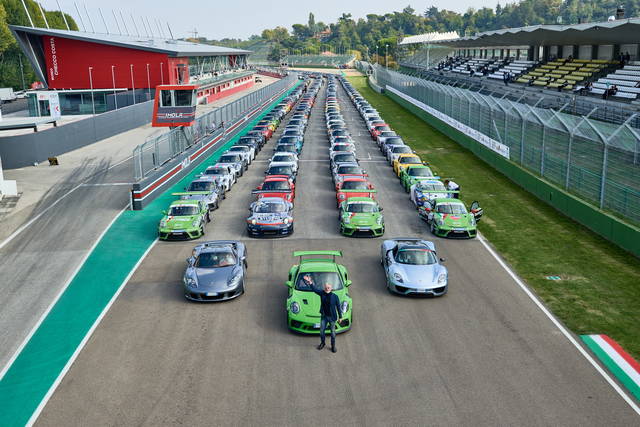