Read the article below to know more information about this amazing new car!

The Porsche 911 GT3 will return with its aileron kit and a tachometer with a double-digit full scale. These are the signals that come from the most recent spy photos of the future 992 GT3: with the Carrera and Carrera S versions that will debut at the Los Angeles Motor Show, the GT3 could be seen already by the end of 2019.
Until now, the prototypes of the 992 have been spotted in various outfits, but even those that could seem GT series did not show very obvious details, beyond the specific exhaust with double central output. Today, however, something has changed and the GT3 comes out in the open with very few camouflages, showing its true face. Inside we find a new bumper with dedicated air intakes and the now classic air vent at the end of the bonnet, while in the queue makes its debut a wing taken directly from the circuits, with support pillars of new design and much higher than in the past. Even the single-nut alloy rims with five split spokes are unpublished, while the braking system is the standard one with steel discs.
All these recent photos can not confirm anything, but those who could hear the prototype shooting at the Nürburgring confirmed that the sound is definitely that of the classic boxer aspirated, assisted by the automatic transmission Pdk. Stay tuned to know the latest news on this fantastic new Porsche 992 GT3 model. 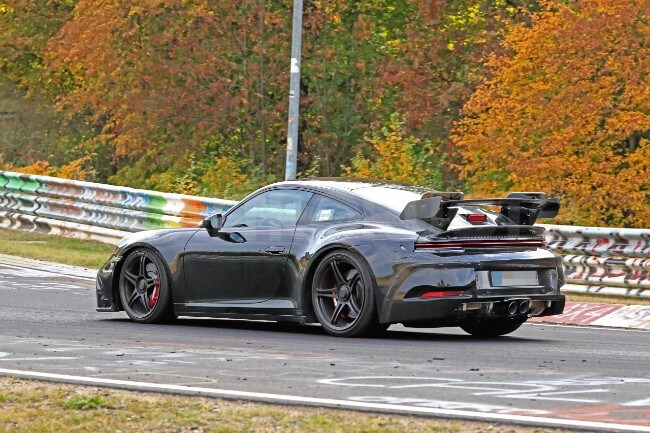