On the Internet you can find many car rental companies which promise supercars and luxury SUVs at affordable prices, but here’s what could happen…

Professionalism is for a few. Nowadays, you have to be careful of possible scams not only in the field of luxury car hire but everywhere.
So you have to trust the companies that have been operating in the sector for years (as we have been operating in the luxury car rental sector for over 40 years), companies that are serious and professional with a positive response among customers.

What are the risks associated with the luxury car rental companies with lowest prices?

Well, there are many possible risks… Let’s see together some of them: 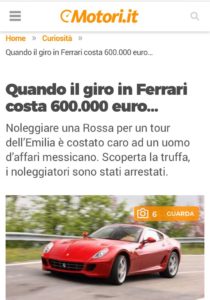 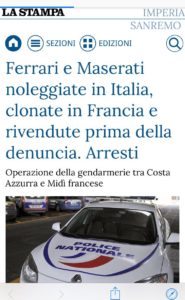 Let’s look at these two cases:
The first newspaper, Motori.it, reported what happened to Alejandro Junco de la Vega, a very rich Mexican businessman who hired a Ferrari 599 to give a more sporty taste to his trip in Italy: after having enjoyed a nice test drive between the hills of Modena and Bologna and stopped in some restaurants to satisfy the pleasures of the throat, the man returns the Ferrari and departed for Mexico satisfied.
But here comes the absurdity: when the bank statement arrived, De la Vega noted that the charterer has charged him  800,000 dollars, equal to about 600,000 euros, instead of the 7,000 euros agreed. Immediate was the complaint to the Italian embassy, ​​which comes in videoconference to the police in Bologna, which began looking for the cheater, a 41-year-old owner of an agency that rents luxury cars.

In the second newspaper, La Stampa, is reported another weird case: Ferrari and Maserati rented in Italy, cloned in France and resold before the complaint.
The case is called “Maranello” due to the high number of Ferrari affected by the criminal project, the judicial police operation started some years ago between the French Riviera, the French Midì and Italy. According to investigative sources, the organization chartered Ferrari and other luxury sports cars in Italy, between Rome and Naples. Then they took them across the border: here, in chop shops, were changed the license plates, serial numbers, and documents. And before the rental ended (all regularly paid), the cars that were “cloned” were resold, preferably in North Africa or to wealthy “luxury commuters” between Russia, the United Arab Emirates and the French Riviera. 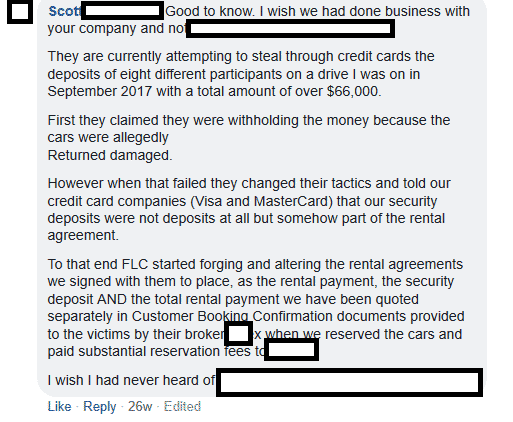 Let’s go on with other risks…

It often happens that many people tell us that they have found low prices on the internet for rent a luxury car and, sometimes, they do not understand the reason of these low prices … we have just explained why: to attract customer’s attention the prices for rent luxury cars are very low (compared to the norm), so in this way it is easier to make scams and instead of saving money you could lose tens of thousands of dollars. Be careful!

With us you can rest easy. We operate in the sector of luxury cars rental for almost 40 years: so if you choose us as your car rental company, you will pay a fair price but you can brag about the support of a serious company.

Italy Luxury Car Hire has a large fleet of luxurious cars of all kinds. From SUVs to supercars, from sports cars to prestige cars, we can always find the perfect and latest model that suits your needs. Indeed, our goal is to make your holiday or business trip in Europe unique and unforgettable,taking care of all the practical things and leaving you the freedom to enjoy only the most beautiful parts of your journey.
We operate all over Europe, from big cities to small villages, delivering your dreamy car straight to your arrival at the airport or to your house, hotel or resort, and collecting it wherever and whenever you tell us. We pay attention to every single detail because these are the things that make a vacation special. From the condition and cleaning of the car, to the baby seats for your children, from the punctual delivery and collection, to the h24 support for our clients (via mail, via phone or via Whatsapp).

We also organize amazing supercar tours in Italy (on request also in France and Switzerland). Our special organized tour  aims to promote the Italian excellences under various aspects: from refined 5 star luxury Hotels to amazing gastronomic specialties in Michelin-starred restaurants, from exciting driving experiences of Ferrari and Lamborghini supercars, to the visit of iconic locations. All of our services are exclusively aimed to the well-being of our special clients. Choose us, you won’t regret it!