It is divided into nine versions of the third generation range of the BMW Z4 roadster designed to fill the gap left by the second series Z4 when it ended its career in 2016. There are three versions available: Z4 sDrive 20i, Z4 sDrive 30i and ZM40i. The latter is offered in one set-up, while the first two are offered in three versions each: Advantage, Sport and MSport.
The BMW Z4 sDrive 20i features a 197 bhp 1998 cc 4-cylinder engine ranging from 4,500 to 6,500 rpm, with a maximum torque of 320 Nm between 1,450 and 4,250 rpm. The BMW Z4 sDrive 30i has the same unit of 1,998 cc but in the 258 hp version between 5,000 and 6,500 rpm, with 400 Nm of torque between 1,550 and 4,400 rpm. Then there is the “bad” version: the BMW Z4 M40i that under the bonnet has a 6988 cc 6-cylinder engine delivering 340 hp between 5,000 and 6,500 rpm, with a maximum torque of 500 Nm from 1,600 to 4,500 rpm. As far as the gearbox is concerned, the BMW Z4 faces the market with a transitory proposal. For the BMW Z4 sDrive i20 the 6-speed manual transmission is foreseen, but in the first commercialization phase they will be available only with the 8-speed Steptronic automatic transmission (surcharge). The Steptronic transmission will be the only one available for the Z4 sDrive i30, as well as for the M40.
For the entire range of the BMW Z4, standard equipment includes all the basic safety devices even if the automatic braking system is not standard: you need to order the Driving Assistant which costs 920 euros and brings with it many other security systems : warning of pedestrian presence and risk of crash with City braking function (the acoustic and visual warning are always in operation, the automatic braking used to mitigate the impact speed comes into operation between 5 and 85 km / h towards vehicles, between 5 and 65 km / h towards pedestrians, over 85km / h is pre-loaded with the braking system), Speed ​​Limit Info with overtaking indicator, Warning of accidental change of lane (enters into function over 70 km / h, signals lane change via a steering wheel vibration and automatically applies a steering intervention to return to the lane), Rear traffic warning (in the maneuver parking in a road with the rear end up to 7 km / h the system signals to the driver the presence of vehicles approaching, if the car is equipped with the rear view camera reproduces a further realistic image in the display), vehicle presence detector in blind spots (active from 20 km / h, if the driver attempts a overtaking maneuver while the blind spot is occupied a vibration is emitted at the wheel and the visual indicator on the mirror flashes) and the rear collision warning ( detects the approach of vehicles to the rear, if a possible buffer is detected, the system automatically activates the 4 arrows, pretensiones the safety belts and closes the windows). The Advantage versions add a wide range of accessories and devices to the standard equipment, including sensors that help with parking maneuvers and the dual zone automatic climate control. The Z4 Sport, on the other hand, envisages a series of special external finishes that make the image more sporty. Finally, the BMW Z4 M40i (pictured) in addition to being recognizable for the “M” logos on the sill and sides. 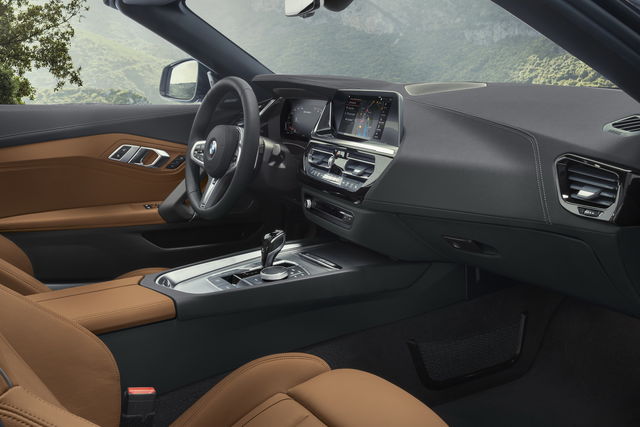