After four years of life, the third generation of the Audi TT is being restyled:  engines and on-board systems were revised and improved.

The first Audi TT made its debut in 1998 and, with its line inspired by the Bauhaus school of the early ‘900, it was immediately a success. The third generation of the Audi TT was launched in 2014, different from the “ancestors” due to the less rounded style that in the past. Now it is updated with a few wise aesthetic interventions, equipment and engines. The new Audi TT 2018 receives touches to the design all in all limited: in the front you can notice a grid no longer with horizontal slats, but with a honeycomb weave, and a new design of the air inlets at the bottom, while behind it changes slightly the fascia in the lower part and we find lanterns with different interior design. In short, only a more than careful eye will distinguish the renewed TT.
On the renewed Audi TT are available upon payment the front lights led and those led with active matrix. On request you can also have the new external S line package (mounted on the yellow car above), made up of several front air intakes, sill strips and a rear oversized air slide. On the TT 2018 also debuted the colors blue Cosmos, orange Pulse and blue Turbo, the circles from 18 “to 20” are redesigned and arrive new for the interior equipment: since the least expensive version there are the driving mode selector, l automatic activation of “wipers” and headlights, heated mirrors and wireless base to recharge compatible smartphones. Optional digital Active Display instrumentation and multimedia system connected to the Internet. 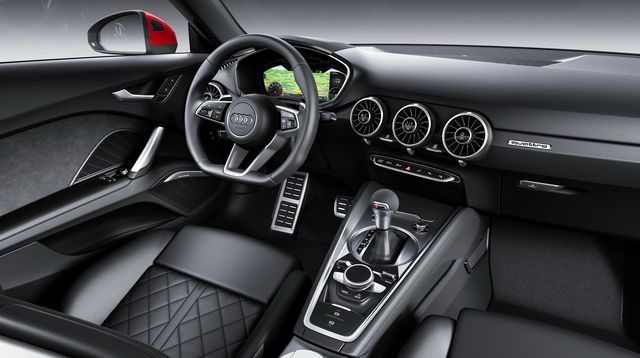 The engines that can be ordered initially on the Audi TT 2018 are the 197 hp, 245 hp and 306 hp turbo 4-cylinder petrol, available respectively on the TT 40 TFSI, TT 45 TFSI and TTS. All are equipped with an anti-particulate filter to reduce exhaust gas. The Audi TT 40 TFSI is the only one that can only be ordered with front-wheel drive, while the four is optional on the TT 45 TFSI and standard on the TTS, which while waiting for the bad Audi TT-RS is the most powerful and sporty of the lot In fact, it takes only 4.5 seconds to accelerate from 0 to 100 km / h. Electronic shock absorbers are also included in the price of the Audi TTS. All the news are also planned on the TT Roadster, equipped with a hood that can be folded electrically up to 50 km / h instead of the rigid metal roof.
The Audi TT 2018 will be on sale by the end of 2018 and can also be ordered in the special version TT 20 years, an exhibition in 999 pieces to celebrate the 20 years since the first TT. The colors are two, gray Arrow and gray Nano, but among the customizations include tailored exhausts, oled rear lights, the four rings with opaque effect on the access threshold and upholstery in brown Nappa leather. In the passenger compartment there is finally a plate with the progressive number of the sample. 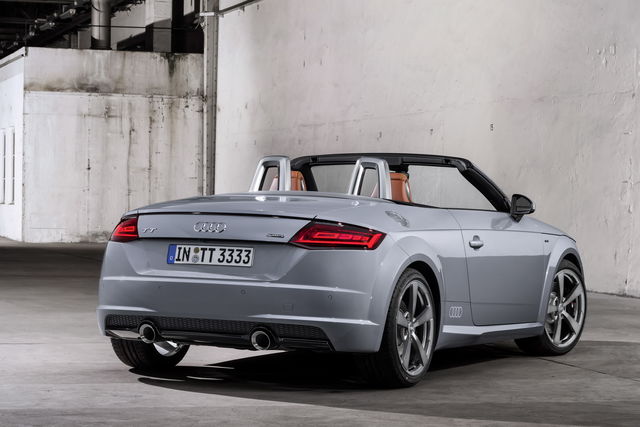