The next year we will see the launch of the Mercedes EQC, the first model of the car manufacturer fully electric,  a medium-sized SUV (corresponding to the current GLC) that brings the new EQ technology brand to its debut. These recent months, numerous prototypes, camouflaged with the now traditional ‘optical’ stickers, have completed the tough winter tests in the north of Sweden. The next stages on the road to mass production will be the suspension and transmission tests, integrated into those at high temperatures that take place in southern areas. Mercedes pays great attention to the verification of the quality of the new models on road: despite all the advantages of digital tests (those carried out in the laboratory with computer-controlled simulations) in terms of speed, availability of data and efficiency, no vehicle enters to the series production without having passed the necessary tests on the road. The focus here is on the strength and durability of the components – such as transmissions – and the functionality of the entire vehicle in various weather conditions. In the case of the new EQC SUV, of course, Mercedes engineers pay special attention to the electric powertrain and the battery, which are tested and approved according to the strict standards of the Three-Point Star. Another innovative area, given that it is a totally electric vehicle, is that of acoustics, since, unlike a car with a combustion engine, the EQC engine does not emit any sound.

However, the highlight of this model is the propulsion scheme, which includes two 150 kW electric motors, one front and one behind, to realize the electric all-wheel drive. Curiously, the engines are not identical: they are the carcasses, or the containers of the mechanisms, while their windings are different, to optimize the performance, since the engines have different tasks. The front one mainly works at moderate and constant gaits, while when you ask for more performance, the one at the rear also comes into play.

The lithium-ion battery occupies the entire floor and the space under the back seat: Kelz speaks of “more than 70 kilowatt hours”, which should be enough for at least 350 kilometers in the real use. And there are no epochal jumps of energy density around the corner: according to the engineer, soon with lithium can still be improved by 20-30%, but for a step forward more decisive you will have to resort to a different chemistry. So, for now the 650 kilos of accumulators bring the car complex to 2.5 tons of weight, but the pair of two engines propellates from zero to 100 in about five seconds, gluing to the back when the technician sinks the accelerator. Stitches sewn to the maximum speed data, but Kelz admits that the EQC will not be an “autobahn killer”, since as the pace increases, current consumption increases exponentially and the yield collapses. 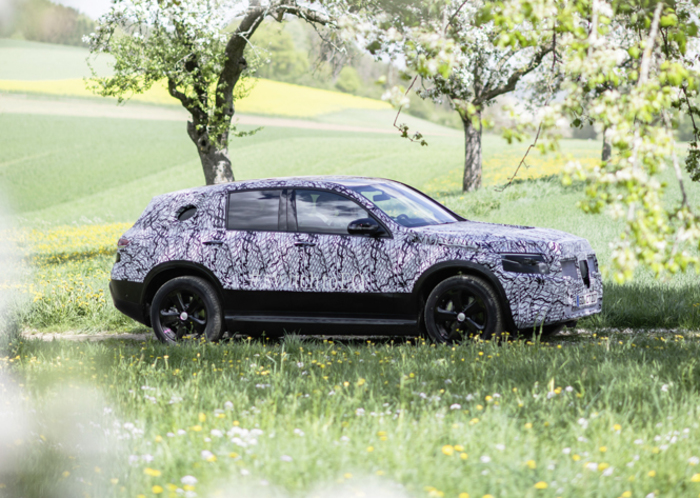