The Lamborghini Urus has a chinese clone: the Huansu Hyosow X-Series. Much more than just similarities.

If you simply look at the chinese SUV, you can immediately notice the similarities with the Lamborghini Urus. Surely this is not a tribute to the most sporting and luxurious SUV ever built in Italy, but a real act of cloning. And this is not-sadly-the first case of cloning made by China. The Landwind X7, for example, recalled the lines of the Range Rover Evoque. The Huansu Hyosow X-Series will be built by Beiqi Yinxiang Automobile – a joint venture between Baic and Yinxiang Motorcycle Group – using a platform of Baic origin for high-wheeled vehicles. 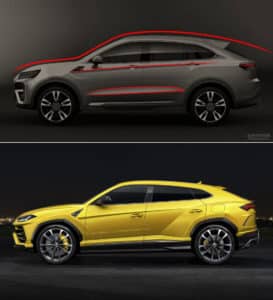 The new Chinese SUV, Huansu Hyosow X-Series, recalls both in the forms and in the proportions the Lamborghini Urus: the overall stylistic setting, in fact, follows the original Urus while highlighting a majority of curved lines rather than angular lines.
So, the similarities of the Huansu Hyosow X-Series with the Italian SUV are evident at the level of the frontal region, both as regards the ribs and the volumes of the body, and as regards the shape of the optical groups and the air intakes for cooling the engine. Also similar to the trend of the side, while in the tail the signature light of the lights is  equal to the Lamborghini Urus.

Two important differences: the engine and the price

Even if these two SUVs are similar, there is an important difference in the engine. Indeed, the Huansu Hyosow X-Series will be more modest with its 2 liter turbo, 200 hp. An important fact considering that the Lamborghini Urus has a V8 engine and 650 hp.
Moreover, even the price of these two 4×4 models will be very different: in fact the chinese SUV will cost 15 thousand Euros, while the Lamborghini Urus costs 206 thousand Euros.