Today the luxury car market has two special vehicles that are new in the name and in the substance. New as they are side by side for the first time on the highest steps ever achieved by the SUV segment.

To date, evaluations are made without the full sensations of driving, yet to be compared in detail , so we just want to put the focus on interesting evaluations about their numbers: they are two SUVs next to two hundred thousand Euros, with powers ranging around 600 hp and an uncommon media popularity. Two 4×4 both made on the MLB Evo platform with similar propulsion, but far apart from perception and target: we are talking about the Lamborghini Urus and the Bentley Bentayga.

About the Lamborghini Urus we can say that is a massive and sporty SUV. It has a form that is clearly more thinned and gritty than Bentayga, a unique line, with a “thin” waist that then spreads towards a muscular rear end. Offered in less color variations (13) with three types of rim, up to 23 ”. The gem is to be able to choose between six different colors for the brake calipers and three for the exhaust terminals. There is also an off-road package, which remodels underbody and bumper. Lamborghini Urus integrates a V8 bi-turbo engine with a maximum power output of 478 kW / 650 HP, the best weight-to-power ratio on the SUV market. For this reason, Urus’ performance level is unrivaled. The 8-gear automatic transmission, together with the permanent 4-wheel drive system with active torque vectoring, enable the driver to perform exceptionally on every occasion and in every situation. Urus can be enjoyed whether in the city, on the racetrack, on a snowy mountain, on gravel country roads or in the desert. 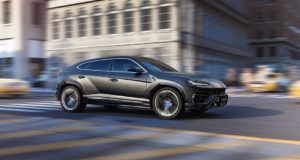 About the Bentley Bentayga , the new-entry of the range, is potentially more hustler with the W12 engine, but the shapes are certainly not finely aerodynamic like the Lamborghini Urus. This SUV has a top speed of 187 mph (301 km/h). All this power is accompanied by elevate control thanks to its new optional carbon ceramic brakes. The discs are 370 mm in diameter at the back and 440 mm at the front, and provide amazing stopping power. New disc crowns maximise cooling airflow, while reduced brake judder and thermal fade enhance total reliability in all kind of environments. Similar in absolute dimensions, except for the greater height (of 10 cm) but different in visual perception. Bentley Bentayga is much more muscular and devoted to solidity. So it gives a serious impression and perhaps we see that is less sensitive to fashion. Those who prefer the balanced majesty rather than the dynamics, with Bentayga find the classic Bentley elements, of the grid or of the circular headlights. With this new version of the W12, Bentayga also allows itself a few sports details, but certainly not capable of approaching Urus on the front. 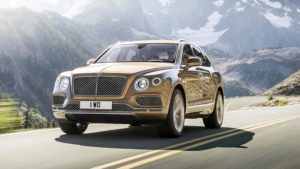