Lamborghini Avventura, the expedition program organized by the famous car company in order to discover the most spectacular landscapes in the world, has made a stop in Iceland. Seven Lamborghini Urus of different colors came from the peninsula of Reykjanes, home to the Blue Lagoon and the geothermal park, and ventured along a 900 km route where asphalt and dirt roads alternated. The trip lasted two days and was characterized by extremely variable weather conditions; it has gone from the sun to the rain, even up to heavy snowfall.
from the peninsula of Reykjanes, the Lamborghini Urus have gone as far as the head of Dyrhólaey, known for its imposing rocky arch that juts out over the sea, passing through the southern slope from which one can admire the black beach of Reynisfjara. When you get to the Hjörleifshöfði promontory, the skills of the Lamborghini Urus have been put to the test on the track underneath. with the Soul selector, with which you can set as many as six driving modes, it can also cope with difficult conditions. On the way back to the capital, Reykjavik, the political and economic center of the country, the convoy has flanked the lava fields of the Laki volcano and the glacial lake of Fjallsàrlòn, to the ice-lagoon of Jökulsárlón, one of the most fascinating and fascinating whole island. That of Iceland is only the last stage of Lamborghini Adventure: previously there have been expeditions to Andalusia, Transylvania and Norway on board Aventador and Huracàn.

According to the official Lamborghini’s website “with the Anima selector set on Terra, the Urus convoy then ventured to off-road routes and fords, providing a perfect demonstration of their drivability on the most extreme terrains, such as on the tract that runs below the promontory of Hjörleifshöfði down to the sea, or leading to the “black” glacier of Kötlujökull. The journey continued through moss-covered lava fields in the area of the Laki volcano, the iceberg lagoon of Fjallsárlón, at the southern end of the Vatnajökull glacier, and on to the extraordinary vision of the glacier lagoon Jökulsárlón, amidst icebergs and seals. And finally, the convoy returned to the capital Reykjavik, the political, cultural and economic heart of the island, bringing civilization after so many kilometers of nature and a silence broken only by the roar of the seven powerful Super SUVs.” 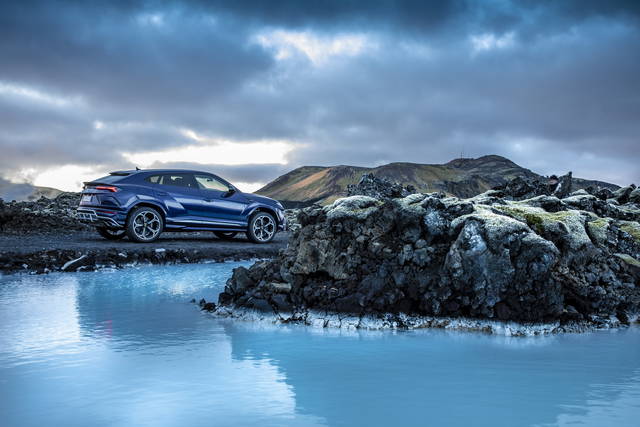