Rent a McLaren 720s in Cannes

Italy Luxury Car Hire proposes a wide range of supercars so you can choose your favorite model among very famous brands.

If you rent a McLaren 720s in Cannes, you will enjoy more your stay in the French Riviera.
We ensure a perfect service, in fact, we can deliver your exclusive car wherever you want (to your airport/house/hotel or resort), so you can start your journey in the highest comfort. Upon the car’s delivery our professional operator will explain in detail the operation of the vehicle and all its specific features. All our services are aimed to the well-being of our special customers.

Brief in-depth information on the supercar: 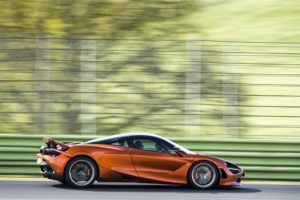 We propose the McLaren 720s Coupè, a fantastic luxury car wiht 717 hp, a maximum speed of 341 km/h and it goes from 0 to 100 km/h in 2,9 seconds. All this features make it clear its power.
Robert Melville, Chief designer at McLaren automotive, said that “every profile, every curve on this car have been designed for maximum driver engagement”.
This special supercar will give you new thrills due to its top performance.

Which are the best restaurants to go?

In Cannes, you will surely find many sophisticated and luxurious restaurants. One is the Michelin starred restaurant “La Palme d’Or”, located at the Hotel Martinez and opened in 1985 by Chef Christian Willer. In 1991 the restaurant has obtained 2 Michelin stars. Some years later, Chef Christian Sinicropi took control of the kitchen. Here you will try a special culinary experience, thanks to the ability of the Chef.

“Passionate chef and artist, Christian Sinicropi takes inspiration from art, literature and philosophy to transform the best local and seasonal produce into true works of art. From the handmade ceramic plates (created and designed by the chef and his wife) to the dish, every creation tells its own story and highlights the chef’s passion for nature and art. Every year, during the glamorous Cannes Film Festival, a special menu created for the Festival’s Jury dinner pays homage to world of cinema. The sensory experience is enhanced by the restaurant’s elegant decoration and the panoramic views over the bay of Cannes and the glistening Mediterranean sea.” said the restaurant’s official website.

Another sophisticated restaurant is the “Carlton” located at the “InterContinental Hotels & Resorts”.
“With its prestigious location on the Boulevard de la Croisette, this luxurious hotel blends the charms of yesteryear with upscale, modern amenities. Soak up the timeless, sophisticated atmosphere of this iconic hotel, which was featured in Alfred Hitchcock’s 1955 classic film “To Catch a Thief”.Relax on our private beach and unwind with a glass of champagne on our terrace. Take in the sweeping sea views, then enjoy a gourmet dinner in Carlton Restaurant.” said the hotel on its official website.

So, at the Carlton restaurant you will try new special flavors due to the refined gourment cuisine. The restaurant is styled with marble, and overlooks the sea. A perfect spot for your lunch/dinner surrounded by a magical atmosphere.

In Cannes you will find many five star luxury hotels ready to give you the highest standard of quality and comfort.

One beautiful hotel is “Hotel Juana”. “Urban and Art-Deco, the Hotel Juana combines the unique atmosphere of the 30s with a unique arty \”Picasso inspired\” soul; two key elements of a glamorous and authentic holiday at the heart of the Cap d’Antibes gardens. In the 30s, Juan-les-Pins used to be a very fashionable destination, well known for the quality of its hotels, the glam and the unique parties.

Beloved by the Americans, by the happy few, the jazz stars and the pin-up, this little village located on the sea launched the bikini and still is at the base of the summer fashion collections. The Juana has always been the ultimate retreat for the stars of the jazz since 1960. Year after year, it has become the ideal back stage for the stars performing at the famous Festival of Juan-les-Pins.” said the hotel on its official website.

Another five star luxury hotel is the “Grand Hyatt Cannes Hotel Martinez”, opened in the 1920s is a legendary place.

“The Hôtel Martinez embodies the carefree spirit of the French Riviera and the Mediterranean lifestyle. Known for its warm and friendly atmosphere filled with joie de vivre, it was and is the place to see and be seen on the Croisette.Inspired by the landmark’s Art Deco style paired with the colors of the Côte d’Azur, interior designer Pierre-Yves Rochon breathes a new life into this luxury hotel in Cannes. ” said the hotel on its official website.

Which are the best places to visit?

Stroll to Cannes Fishing village during Antiquity known today for its film festival and its promenade of the Croisette lined with palaces. On the roads of Cannes to Menton, you will be in the footsteps of an ancient Roman road, the cornices of the riviera has a panoramic view on the French, Italian alps or on the Cap d’Antibes.

We suggest you to visit a place that it’s very impressive: “les Iles de Lerins” (the Lérins Islands), a group of four Mediterranean islands off the French Riviera.

According to Wikipedia: ” The two largest islands in this group are the Île Sainte-Marguerite and the Île Saint-Honorat. The smaller Îlot Saint-Ferréol and Îlot de la Tradelière are uninhabited. Administratively, the islands belong to the commune of Cannes. The islands are first known to have been inhabited during Roman times. The Île de Saint-Honorat bears the name of the founder of the monastery of Lérins, Saint Honoratus. It was founded around the year 410. It is in this monastery that Saint Porcarius lived and probably was killed during an invasion by Saracens. According to tradition, Saint Patrick, patron of Ireland, studied there in the fifth century. A fortified monastery was built between the eleventh and fourteenth centuries. In 1047 the islands were raided by Muslim Andalusi pirates. The monastic community today lives in a monastery built during the nineteenth century. The Île Sainte-Marguerite held a fortress where the Man in the Iron Mask was held captive for a time. The battle of 1637 on Lérins Islands is one of the battles of the Thirty Years’ War between the Spanish Catholic Monarchy and the Kingdom of France . This combined naval and land operations and mobilized 39 ships, 11 galleys, 6 fire ships, 12 flutes, and a large fleet of transport. The Spanish garrison was reduced and the French attacked with all their forces. On March 24, 1637 began the siege of the Lérins Islands and the beginning of the attack of five Spanish forts. After a siege of 45 days, the Spaniards from Sainte-Marguerite Island capitulate on 12 May and those of Saint- Honorat Island May 13 . Cardinal Sourdis celebrates a thanksgiving Mass with Te Deum May 14 .In 1707 the Lérins were occupied by the English navy, under the command of Sir Cloudesley Shovell. This was done in order to block the military port of Toulon to help the army of Victor Amadeus II Duke of Savoy and his cousin Eugene besiege that city. Under the French Revolution, the Île Sainte-Marguerite and the Île Saint-Honorat were renamed the Île Marat and the Île Lepeletier, after secular martyrs.”

What are you waiting for? Rent a McLaren 720s Coupé from us and enjoy Cannes!