The Ferrari SP3JC is a unique model produced in a single piece for a collector. Read the article below to know more interesting news!

The Ferrari SP3JC was delivered to its client, a collector who bought it with the One-Off formula, the most exclusive personalization program of the Maranello house, with which the customer actively participates in the creation of the car expressing his preferences and directing the choices of the Ferrari Style Center technicians.
The Ferrari SP3JC is an uncompromising Roadster built on the basis of the Ferrari F12TDF. The design recalls the spiders of the 50s and 60s, although the sculpted lines of the sides and the air vents behind the front wheel arches give it a dynamic and modern look. The 780 hp V12 engine is in good view thanks to the openings on the engine bonnet; on the bumpers stand out the large air intakes and the carbon fiber spoiler. Even the livery was created on the basis of the client’s tastes, who chose a combination of white, which dominates the sides and rear of the car, metallic blue on the front, and Giallo Modena, the color of the rear fins and the numbers “3” on the doors, which are matched with the brake calipers and the Ferrari crests.
At the rear of the Ferrari SP3JC the dark headlights stand out in contrast to the white body, the slightly curved horizontal slits and the bumper in carbon fiber, with angular geometries, with the four integrated exhaust ports positioned on the sides. The cap of the tank is made with brushed aluminum finish, the transverse wing that connects the two fins behind the roll hoop is made of carbon fiber. The seats are upholstered in blue leather, with white inserts; same color choice for the covering of the lower part of the dashboard. 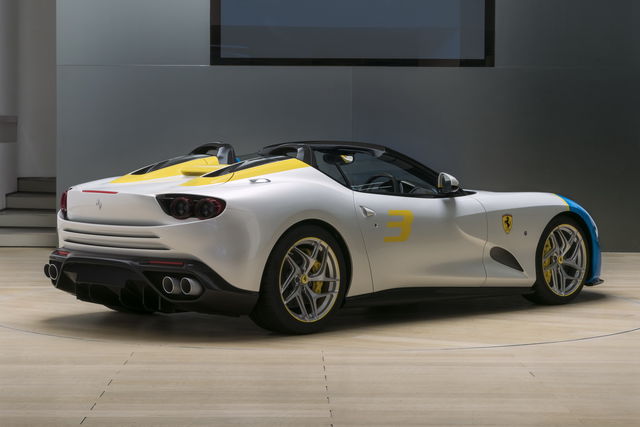