A new Ferrari model is going to conquer our hearts

The Ferrari One-Off program has created a new unique model, the Ferrari SP38. Created at the request of a customer of the Prancing Horse, the new sport car is based on the chassis and the mechanics of the Ferrari 488 GTB and will remain a unique example. Immediately after the delivery ceremony, which took place on 23 May,2018 in Fiorano, the supercar completed some laps of the track waiting to be shown for the first time to the public next weekend on the occasion of “Concorso d’Eleganza” at Villa d’Este. The design of the SP38 has been treated by the Ferrari Style Center which, starting from the 488 GTB chassis, has created a one off with an aesthetic totally different from that of the model from which it derives. The twin turbo boost system with dual intercooler has led the designers to take inspiration from the Ferrari F40, evolving some lines and creating a particularly tapered front that blends with muscular wheel arches to give the two seats a look that conveys feelings of power and agility. Thin specially designed optical groups characterize the new front, which, presenting a totally new setting, proposes a lip of the bumper inspired by the 308 GTB in which the daylight lights have been integrated. On the side, the body has been folded to conceal the air intakes of the engine: a vein starts from the door and joins the rear pillar, leaving space for an almost invisible opening that keeps the air flow necessary for cooling of the intercoolers, positioned at the base of the windows. To dominate the rear there is a bonnet of carbon fiber with three transversal blades designed to disperse the heat of the engine, recalling itself, as well as the rear spoiler, the style of the Ferrari F40. Finally, the exhausts are integrated into the bumper and positioned differently to those of the 488 Pista so as not to disturb the operation of the rear extractor.
Based on the mechanics of the Ferrari 488 GTB, the SP38 also features a 3,902 cubic centimeter V8 supercharged by two turbines and mounted centrally. The eight cylinder with 90 ° inclined banks develops, on the original model, 670 hp at 8,000 rpm and 760 Nm of torque at 3,000 rpm in seventh gear: it is combined with a seven-speed dual clutch gearbox. The traction is rear and is managed by an electronic differential E-diff with traction control F1-trac and Side Slip Control 2, combined with a suspension with active shock absorbers. 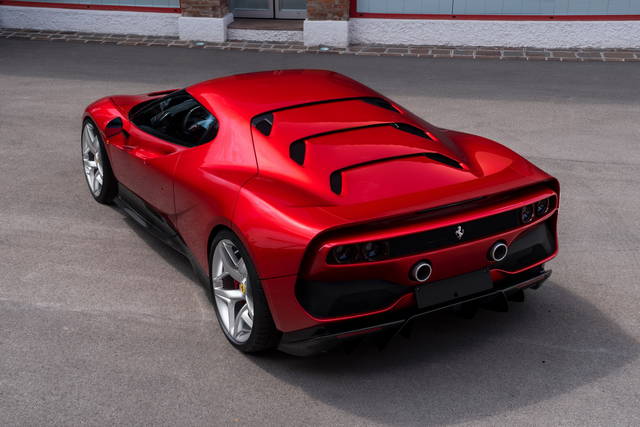