Unveiled the heir of the Ferrari 488 GTB. Read the article below to find out more interesting news about it!

More than a true heir, the Ferrari F8 Tributo is an evolution of the 488 GTB. The sport that will be exhibited in world premiere at the Geneva Motor Show will replace the central-engine V8, perfecting its mechanics, aerodynamics and technology. A small berlinetta projected towards the future therefore, but also faithful to the past as shown by some references to the most iconic eight cylinders of Maranello like the 308 GTB and its majesty F40.
The mechanical base is that of the Ferrari 488 Pista, duly tared and modified to allow customers a better usability than the two seats inspired by the racing sports. The engine is the same 3.9-liter V8 turbo of the Track: the maximum power is 720 hp (50 more than the GTB) at 8,000 rpm, while the torque reaches 770 Nm at 3250 rpm. Even the gearbox has not undergone significant changes: the double clutch with seven ratios is invariably matched to rear-wheel drive and proposes updated gear changes compared to the Pista. The dry weight, thanks to some optional lightening contents, can go down to 1,330 kg, 40 less than the GTB. The performances are the same as those of the 488 Pista: for 0-100 km / h it takes 2.9 seconds (only 5 hundredths of a second longer than the Pista), for 0-200 km / h 7.8 seconds (2 tenths in more) and the maximum speed is 340 km / h.
The new body, designed by the Ferrari Style Center, guarantees a 10% improvement in aerodynamic efficiency. To characterize the front is the S-Duct, a solution taken from the Track and combined with angled front radiators and a redesigned front section: the new, and thinner, LED headlights, have also allowed to integrate additional air intakes for the brake cooling. The dynamic intake sockets of the engine have been repositioned: now they are no longer on the side, as on the 488, but they find space in the area of ​​the rear wing. New is also the rear window, made of Lexan to allow you to observe from the outside the engine compartment: the slots, inspired by the F40, allow an effective extraction of heat generated by the engine, without affecting the efficiency of the spoiler. The latter has been further developed to increase the aerodynamic load on the rear: the new shapes of the wing have allowed the designers to repropose the double headlights, introduced by the 308 GTB, progenitor of the dynasty of the eight-cylinder berlinette, and used for the last time on the F430. 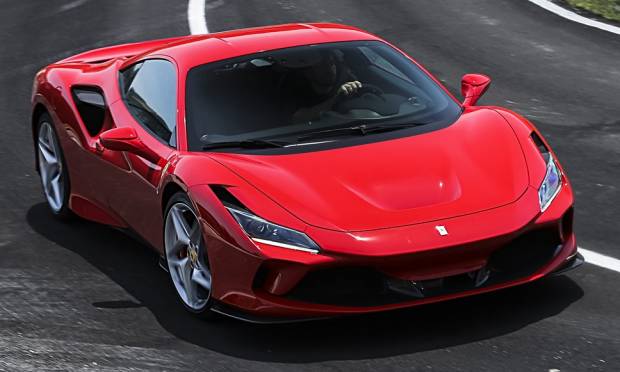