This new charging system is available on the BMW 530e iPerformance, the system uses two plates and charges the 9.2 kWh battery in 3.5 hours.

The wireless charging of the batteries was affirmed on smartphones for quite some time, but it is still very rare on electric cars, where the most common way to power the batteries is to connect them to the power supply via a cable. The BMW goes in the opposite direction and makes available on the hybrid sedan BMW 530e iPerformance a system for wireless charging from inside or outside, called BMW Wireless Charging, thanks to which you can recharge the car battery simply by parking it on a plate. 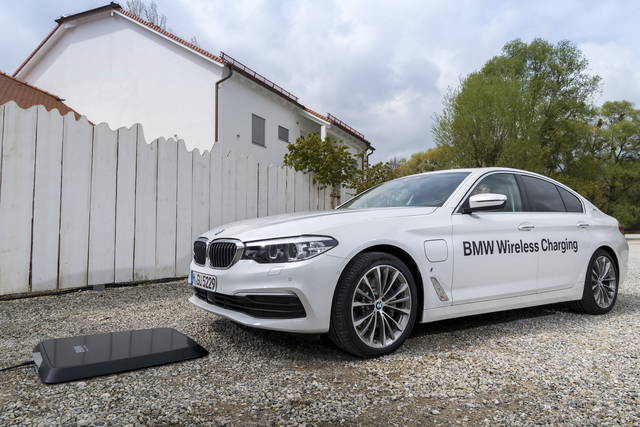 The BMW Wireless Charging system must be ordered for a fee when purchasing the car and includes two parts: a plate to be mounted on the ground (called GroundPad) and a second plate below the car (CarPad). The GroundPad transmitter must be connected to the domestic electricity grid and generates an electromagnetic field, similar to the wireless charger for smartphones. It is then up to CarPad to turn the electromagnetic field into energy and power the car battery. At this point the driver has to do is park properly. To do this, a Wi-Fi repeater is integrated into GroundPad, which reproduces the position of the car on the screen in the console with respect to the plate on the ground and makes the driver understand exactly where he is. The permitted deviation is up to 7 cm in the longitudinal direction, 14 cm in the transverse direction and 8 cm in height. These kind of systems are less efficient than those withthe cable, but according to the German manufacturer BMW Wireless Charging works with a power of 3.2 kW and then recharges the 530e iPerformance battery in 3.5 hours. The efficiency is equal to 85%, so the dispersion is minimal compared to the usefulness of the system, which can be placed for example in the home box and used faster than what you would do with a cable.

Check the video below to know more about this new charging system!