Read the article below to find out more information about this new model!

The BMW presents the 8 Series Cabriolet, which will be available on the market from March 2019. The car derives from the recent 8 Series Coupé, from which it essentially differs by the adoption of the folding canvas top, thus following the path marked by the model that it replaces the 6 Series Cabriolet.
The design of the 8 Series Cabriolet is the result of a project born together with that of the coupé: all the characteristic measures are indeed identical for the two models, but the rear and rear hood are obviously specific. The trunk also offers a capacity of 350 liters with the roof closed and the rear sofa is divisible 50:50 for maximum convenience.
The folding roof is offered in Black or Anthracite Silver colors and takes 15 seconds for complete movement: the hood mechanism can be activated up to 50 km / h and is fully automated. The panel that conceals the space dedicated to the canvas is finished with the same stitching on the dashboard for a unique visual effect. In addition to the standard deflector to be fitted in the rear area, the car can also be equipped with an integrated neck heating system in the front seats: the latter are also optionally available in an air-conditioned version for maximum comfort in all seasons. In the event of overturning there are two aluminum guards that protrude behind the rear head restraints.
As was the case with the coupe, the 8 Series Cabriolet also debuts with two engines: the M850i ​​xDrive petrol with the 4.4-bit turbocharged 530 hp and 750 Nm and the 840d xDrive with the 3.0 hp 320 hp and 680 Nm. the four-wheel drive and the eight-speed automatic transmission Steptronic Sport, while the M850i ​​is also equipped with the M Sport rear differential, M braking system and 20 “alloy wheels. All models also adopt the Adaptive trim as standard. M and the Active Steering rear, while the M850i ​​alone can be equipped with active anti-roll bars included in the Adaptive M suspension Professional package, however the M Technic Sport Package is also included for the 840d, which allows the diesel version of the main sports elements of the M850i. 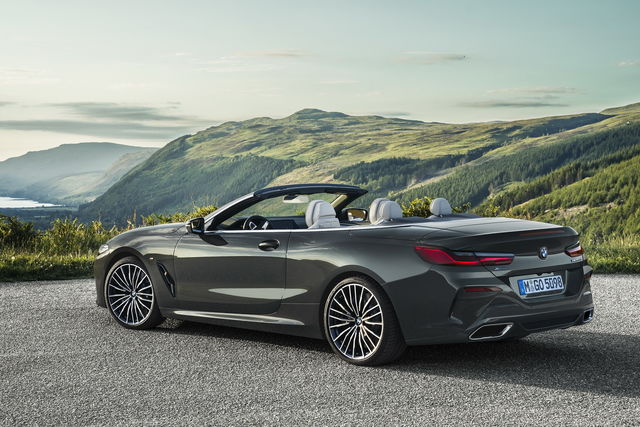