The two-seater Audi PB18 e-tron is a fantastic racing car with a 680 hp engine.

The extended roof and the generous 470-liter trunk should not make think that the Audi PB18 e-tron is a sport car less exciting than others with a more extreme look. In fact, the German company cared a lot about the driving behavior of its two-seater electric coupe. a proposal of style shown in absolute preview at the Monterey Car Week 2018 show that makes it clear from the name its true extraction: PB18 is not just a reference to the place (Pebble Beach, California) and the year in which it was presented, but it refers to the Audi R18 e-tron race car, a two-time winner of the WEC championship for endurance races. This makes it clear that the PB18 e-tron is designed for circuits.
The Audi PB18 e-tron is a little longer than the sporty Audi R8 (453 against 443 cm), but is 200 cm wide and only 115 cm high. The R8, in comparison, measures 9 cm more in height. The silhouette therefore has few equals in the current panorama of sports, considering that the prototype has the very inclined roof front pillars, the extended roof and powerful sides, as well as thin side windows and huge 22 “wheels. The front mask is an evolution of the traditional Audi grill, which appears even more threatening due to the thin LED headlights. The Four Rings are on the hood (and not in the mask) like all the sports Audi. There are also solutions taken from the world of competitions, starting from the rear air slide, mounted higher than usual to improve the passage of air and thus increase the grip.
The racing inspiration of the Audi PB18 e-tron is also noticeable on the inside, where the driver’s seat can move to the center or on the left side depending on whether the driver is alone or accompanied: in the first case he feels like he is behind the wheel of a race car, accomplices the commands collected on the sides of the steering wheel, but just move the seat and lift a bench from under the floor to turn the coupe into a two-seater. The German coupe is equipped with three electric motors and develops a total power of 680 hp, which can rise to 775 hp for short accelerations. On the front axle there is a 204 hp engine, while the two rear ones deliver 476 hp. This solution allowed the technicians to obtain four-wheel drive without mechanical connections between the front and rear wheels. Another advantage is the optimal power management, which thanks to a torque distribution system (called Torque Control Manager) can be distributed between the front and rear wheels to minimize cornering. 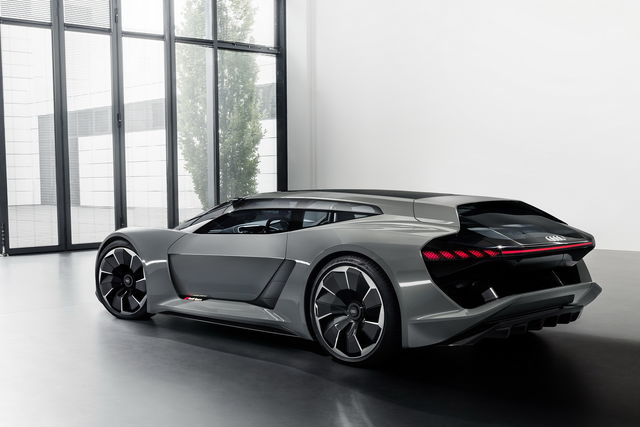 The car goes from 0-100 km / h in 2.0 seconds, but it is the behavior on the road and on the track to make the coupe stand out. On the other hand, the Audi PB18 e-tron does not have any driver assistance system. The two engines are powered by 95 kWh solid-state batteries, more advanced than the lithium-ion batteries used on most hybrid and electric cars. On the latter the element that carries the charge between the two electrodes (the electrolyte) is liquid. As the name suggests, instead, on solid-state batteries the electrolyte is solid. Stacks of this type have been curbed so far by high production costs, but using them on the prototype Audi makes it clear that it is working on it. Batteries of this type can be recharged very quickly, so that the German company estimates a full recharge in 15 minutes (thanks to the charge voltage increased to 800 volts). The coupe weighs 1,550 kilos and travels up to 500 kilometers according to the demanding WLTP consumption cycle.