The zero-emission coupé Audi PB18, is expected on 23 August.

This new fantastic model is supersportive and technological . The design of the Audi PB18 e-tron, a high-performance electric coupé that the German car manufacturer will show on August 23rd during the Pebble Beach Automotive Week in Monterey, the famous Californian event scheduled for August 21-26 where auctions of historical cars, performances and previews of new models are scheduled. The PB18 e-tron will be among the most anticipated, as you can clearly see by observing the image of anticipation published by Audi: the sports will have a look without compromise, thanks to the very generous width (accentuated by the led headlights horizontally), from the collecting cockpit and from the massive wheel arches.
The Audi PB18 e-tron should be inspired by a racing car, so much so that the number 18 was already used in the past by the German company for a racing car: from 2012 to 2014 the Audi R18 was awarded three consecutive editions of the 24 Hours of Le Mans. In this case, in place of the R there is the acronym PB, to indicate the place where it will be presented. Observing the image of anticipation it is also noted that the PB18 e-tron will not have the traditional side mirrors, but two rear-view cameras on the roof connected to screens on the dashboard. A solution of this kind will also be available for payment on the Audi e-tron quattro sales car, which will be shown on 17 September, where the screens are 7 “high-definition in the doors. For the moment, Audi has not anticipated the characteristics of the electric motor.
So we just have to wait for the presentation of this incredible car. Stay tuned…August is at the door! 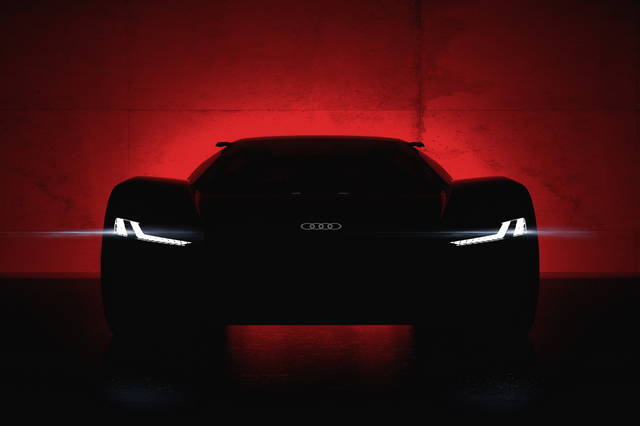