The new range there are the  hybrid versions of A6, A7, Q5 and A8. Read the article below to know more about it!

The Audi A6, A6 Avant and A8 are homologated as hybrids in Italy, but the mild hybrid system they are equipped with does not allow them to move to zero emissions even for short distances. At the Geneva Motor Show 2019 (7-17 March), however, will be showcased hybrid plug-in versions, so with rechargeable batteries from the outlet and a more powerful electric motor, of three models: Audi A6, Audi A7 Sportback, Audi Q5 and Audi A8, which guarantee up to 40 km of gear driven by the electric motor alone with a “full” of energy. The electric motor remains in operation up to a top speed of 160 km / h. The four models are equipped with lithium ion batteries that from 14.1 kWh, which are recharged from the mains (with the domestic one it takes about 5 hours), but also in decelerations: if the slowdowns are less than 0.4 g , the most frequent in traffic, the motor generator recovers part of the energy and supplies the batteries, mounted under the floor of the boot. For more “decisive” delays, the brake pedal must be pressed. The batteries operate an electric motor integrated into the automatic gearbox, which makes the Audi travel at zero emissions, and helps the petrol one in the re-start.
The Audi A8 60 TFSI and is equipped with the 3.0 TFSI 6-cylinder petrol engine, which together with the electric motor develops a total output of 449 hp; in this case the automatic transmission is the 8-speed Tiptronic in the version with the integrated electric motor. The Audi A6, A7 Sportback and Q5 are available with two powertrains: the 50 TFSI versions and have 299 hp, the 55 TFSI and reach 367 hp. Both are equipped with the 2.0 TFSI 4-cylinder petrol engine and the S tronic 7-speed dual-clutch transmission in the version with the integrated electric motor. 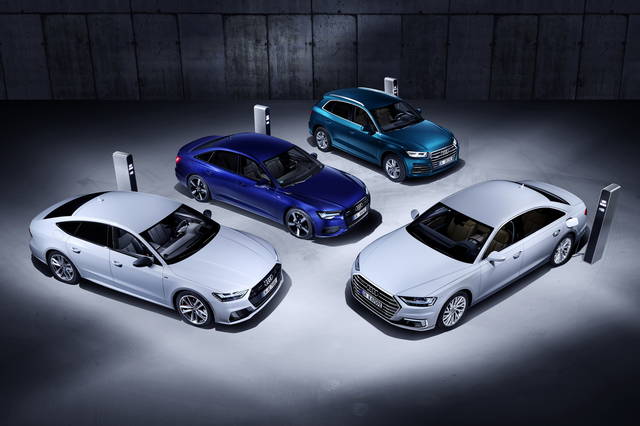