After the prototype presented at the Geneva Motor Show, Audi finally unveils the e-tron, a sporty SUV with two electric motors for a total of 408 HP.

The Audi e-tron is the first series electric vehicle of the car manufacturer in question, and is presented in San Francisco. Long 490 cm, 194 wide and 162 high, it is a sporty sports suv. Two current motors, one front and one rear, push it; the combined power is 408 hp (300 kW), while the driving torque is 660 Nm. In normal grip conditions, and if the maximum power is not required, the traction is rear. When it is necessary, however, the front electric motor also starts working (the driving force is distributed through an electronic control unit on the two axes), making the car a 4×4. Data released by the Audi speak of a one shot from 0 to 100 km / h in less than 6 seconds and a maximum speed of 200 km / h. Remarkable the trunk, for an electric: the compartment has a capacity of 600 liters (plus another 60 in the front, where you can store the power cord), which become 1,725 ​​lowering the back of the sofa. The Audi e-tron should arrive at the end of the year, with prices starting at around 80,000 euros.
And what about its autonomy? The battery pack of the Audi e-tron (which weighs 700 kg) is under the floor, between the two axles: it includes 36 modules, arranged on two levels, and is protected by an aluminum structure. The lithium-ion battery works at a voltage of 396 V and stores 95 kWh of energy. According to the company, in the WLTP driving cycle (the new system for measuring consumption and emissions, which promises values ​​close to those found on the road), the e-tron has a range of more than 400 kilometers. On long journeys in Europe, you can recharge your batteries in the 150 kW direct-charge rapid-charging stations that, for the home, are able to charge the machine at 80% in 30 minutes. By the end of 2018, in the European Ionity network (created by the Audi, together with BMW, Daimler, Ford, Porsche and Volkswagen) the high power columns will be around 200 (with six charging points each), while in 2020 they should reach 400; they will be placed at intervals of around 120 kilometers along the motorways and main thoroughfares. As an alternative to ultra-fast recharging, it is possible to “fill up” in 8.5 hours with the 11 kW alternate current wall boxes and in a shorter time with 22 kW (provided that the car has a second outlet charging, optional). With the MyAudi app it is also possible, depending on the autonomy, to find the nearest free public restocking points, calculating the arrival time and the time needed to recharge.
The style center of the Audi has paid particular attention to the design of the side mirrors of the Audi e-tron, a component usually very detrimental to the aerodynamic. The standard ones have a streamlined shape, but in option there are thinner wing-shaped arms, which integrate small cameras: reduce the overall width of the car by 15 cm, improve the passage of air and give the car an appearance futurable (until now they had only been seen on the concept cars). The images are projected inside the passenger compartment on two 7 “oled screens in the upper part of the door lining, near the dashboard. You can change the frame by sliding your finger on the surface of the display. 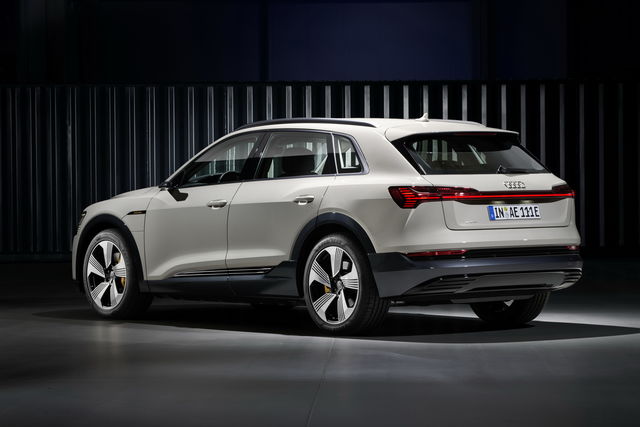