The new production of the Audi A3 Sportback Admired has 18” wheels and a digital dashboard. Read the article below to find out more interesting news about it!

As of now you can order in the “basic” versions, Business and Sport, the compact sedan Audi A3 Sportback which receives a fourth level of equipment: it’s called Admired and is the richest and most expensive (from 29.640 euros with the petrol engine 1.0 from 116 CV). Included in the price, however, are the 18 “wheels, the LED headlights, the dual climate, the speed regulator, the rear distance sensors, the 12.3” screen for the digital instrumentation and the style package. S line exterior, which includes the sports bands, the front in shiny black, aluminum details on the side sills and a small rear spoiler. On the Audi A3 Sportback Admired is also standard MMI Plus multimedia system, equipped with a 7 “screen, onboard wifi connectivity, real-time updates on traffic and information on parking, places of interest or fuel prices.
Along with the new Admired outfit, some new features have arrived on the Audi A3 Sportback for the Business version, on sale from € 27,240, which now includes the MMI multimedia system, speed regulator and rear proximity sensors in the price. The engines expected on the new production of Audi A3 Sportback 2018 remain the 1.0 TFSI 1.0 HP petrol, 1.5 TFSI 150 hp and 2.0 TFSI 190 hp, in addition to 1.6 TDI diesel 116 hp and 2.0 TDI 150 and 184 hp. During the update, the engines take on the new and complex naming system, based on power bands in Kw and not on the displacement: the 1.0 TFSI is therefore called 30 TFSI, because in category 30 are included engines 81 and 96 kW ( from 110 to 131 HP), while the 1.5 TFSI becomes 35 TFSI and the 2.0 TFSI changes its name into 40 TFSI.
Check it out the pic below! 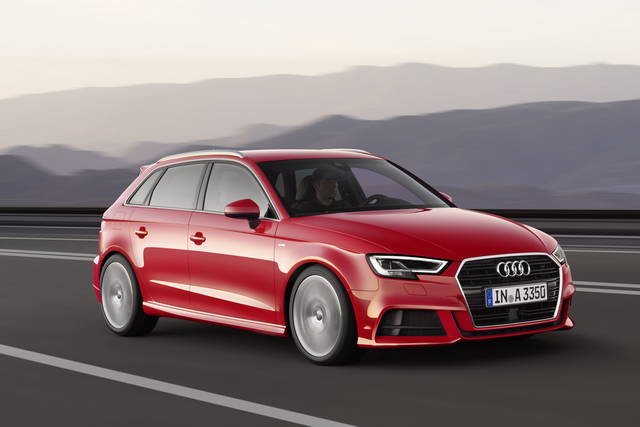